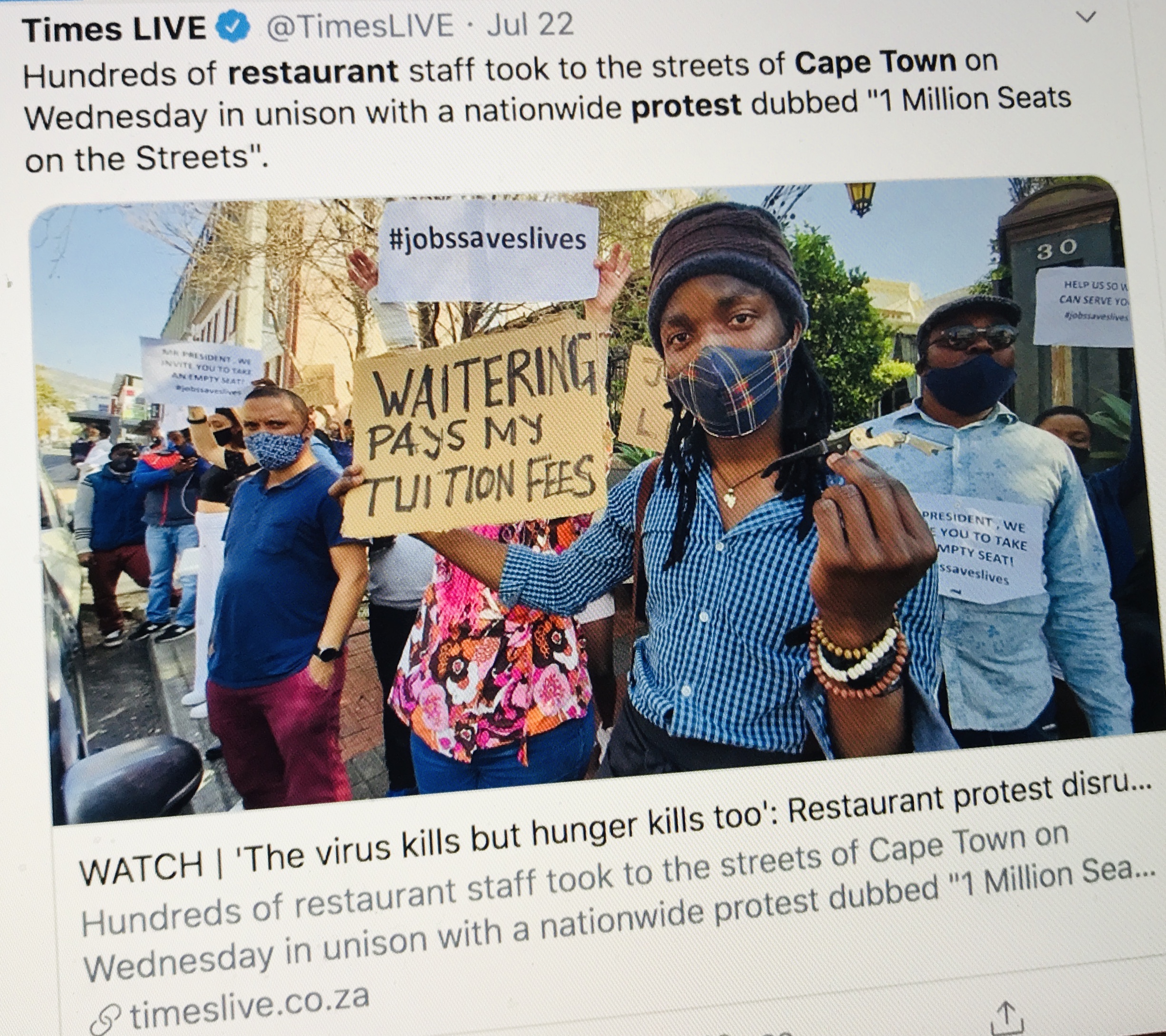 My head has been particularly ADD… flipping from one idea to the next… hardly finished typing a sentence before another vision comes to mind, a scene to describe, an idea to share, or a post, or a chapter to structure; it’s as if my mind has been running naked down the street and I haven’t been able catch the crazy thing and put it back in its strait-jacket; lock it up, maybe tranquillise it, certainly give it therapy… I tell my mind: You cannot share everything that’s going on in your head at one time. Slow down!

That just about sums up this stage of my lockdown. I’m weary, confused. These past ten days, I’ve been easily buffeted by incompetence, corruption and uncertainty. Not that anything can ever be certain. I can’t decide if Ramaphosa is a rogue or if he has a plan up his sleeve.

I’ve been too glued to twitter, and Facebook… shocked at the hospitality industry protests broken up by heavy-handed police with their militarised trucks and tear spray yesterday – these people run restaurants and work as waiters for God’s sake! It’s not as if they’re militant activists. The worst they could do is accidentally stab you with a fork; they smile a lot and serve up steak and ice-cream, and keep people happy. ‘Save jobs,’ and ‘We’ll keep our windows open too!’ read the placards, referencing packed taxis, with windows shut tight against the chill, keeping the Covid in. While in other parts of the city Eskom vehicles are stoned, electricity is shut off. The bootlegging business is thriving, and grannies are selling cigarettes on street corners. One in three adults are going to bed hungry. Our economy does not sustain life. Kids are begging for bread at the Blue Route robot lights. My boy-man has watched more video-games than he has in the past five years. And his great ambition, now that he doesn’t enjoy sustained guidance from his stalwart teachers, is to get a red and orange chacma babboon, with fangs, a screaming monkey, tattooed on his left pec. God help us all!

The Covid, the closing of schools, and crime, it’s all interchangeable, a rondomtalie. Round and round we go. Janie told me, ‘Some boy got shot dead when the gang mistook him for someone else… it’s these masks… you can’t tell the one from the other….’

Apparently though, as I heard reported on radio, according to some survey or other, South Africans are still a hopeful nation; seventy percent of South Africans look forward to a turn in the economy, a turn for the better. (Could it be worse?) I thought of Clare making sandwiches for Ladles of Love and Amanda making soup, and indeed the Ladles of Love creating a World Record for sandwich making on Mandela day – 304 589 sandwiches made in one hour in the Mother City; all those volunteers generously looking after those who can’t do it for themselves right now, including neglected domestic creatures. I thought of the MID plan afoot to create a safe space for the homeless, and I thought, Yes, it can get better. It has to. I thought of my darling  son, when I collected him from school the day before, saying to me: ‘Mom, you look sad, can I hold your hand? I have recently sanitised mine…’

Yesterday, for the first day in two weeks, after I’d skrikked in the mirror, saw the resemblance to a cross between Einstein on a bad hair day and Daisy de Melker, my hair distinctly three colours, in a wild bob, I thought this must stop! I put out my yoga mat, did squats, lunges, and sit ups, made myself do it.

In the shower, I washed from top to bottom. My hair, my face. I blow dried my locks. I  put on anti-Daisy face cream and sunscreen and makeup, and a floral top, and high heels. I went out, to the Orangezichet market, my hand sanitiser in my bag, my mask on, I drove to the City. The green city, so pretty; got to the harbour, watched yachts and container ships on the hazy water. People were out and about, on a beautiful, calm day. I pulled my shoulders back, enough of this cementing my posture into a double for the hunchback of Notre Dame. At the venue I bought veg and cheese and dips. I bought cardamom buns (my favourite) and blue berries and mohair socks, and I was grateful I could support these traders at this internationally renown open-air market…

I had resolved, just for one day, that I could do it (and I did), be less of a drowning woman and more like, as Marcus Aurelius suggests, in his Meditations, ‘…the rock that the waves keep crashing over. It stands unmoved and the raging of the sea falls still around it.’

In the evening I had a glass of Merlot to promote heart health, and relaxed, forgetting about the Covid. I watched rubbish TV, something with ‘Naked’ in the title. (Reality survival, dating, cooking, it’s all been done, now it’s all being redone – naked!) As I’d exercised, I ate the cookies I’d bought at the market, the entire packet. My brain said, they’re oatmeal, with ginger, that miracle spice loaded with anti-oxidants to combat high blood pressure, plus ginger promotes healthy ageing.

Except this morning, I woke with my body sore body from that twenty minutes of exercise, my thighs as tight as rocks, I could hardly haul myself out of bed. And my stomach was heavy and plugged up with carbs and greed. And I had a headache… blame the cheap plonk bought on the black market.

I looked in the mirror, noting again the resemblance to Daisy. I could play the lead role in her story, not that I’ve killed anyone. (Yet.) I still had that wide-eyed stare that comes from exhaustion after a couple of hectic weeks, where everything has seemed surreal.

Why should I get out of my pyjamas? Any real reason? I am truly slowing down today. I got back to bed. Having a proper rest, taking the strain off my muscles… giving myself permission to just be…. like the cat lying with me on the bed… it’s quiet out there, no one is going anywhere, doing much at all, and it’s fine… It’s Sunday. I’m taking a break from the rondomtalie. The round and round we go. I am going to read and recover. (Tomorrow I’ll be back to my crazy self. Tomorrow I will do the right thing. A contradiction in terms, I know…)

On hope, hardship and the ‘Jerusalema’ phenomenon

Wednesday – reflection (notes) on a Birthday