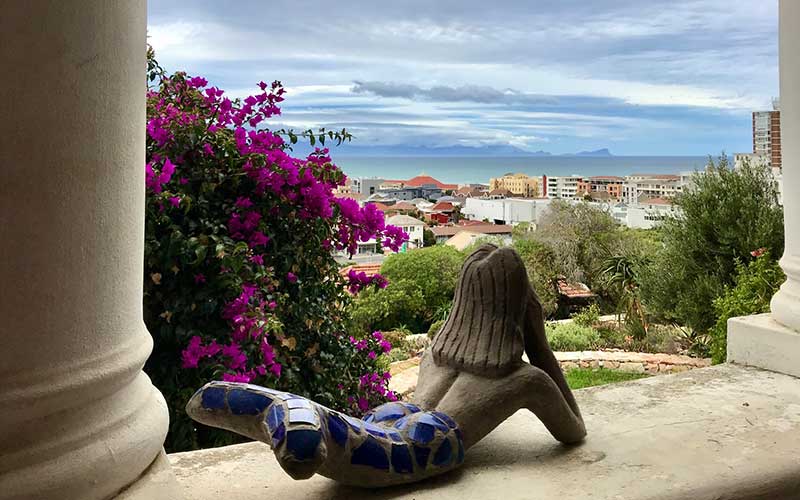 Joanne is an author and editor with broad interests, having written thrillers, young adult novels, and a moving memoir titled Death and the After Parties.  In her crime novels, she features Rae Valentine, an ex-junkie amputee turned PI and motivational speaker. I find Rae one of the most interesting protagonists of the South African crime genre, and I’m delighted that Catalyst Press has just published the first Rae novel, Divine Justice, in the US. Publishers Weekly loved it, saying that “Staccato prose moves the action along at machine-gun pace reminiscent of classic hard boiled mysteries…” and that “…fans of George V Higgins and James Elroy are sure to have a blast.”

This is Sunshine Noir at its best! Welcome today’s guest blogger, Joanne Hichens.

What a wonderful array of blogs to choose from on Murder Is Everywhere!

As an unknown entity on these pages, I thought I’d tell you a little about who I am as a person and writer. I live with my son, and partner, two dogs and two cats in Cape Town, South Africa, in a seaside suburb called Muizenberg.

If I had to post a view from my window it would be the one attached here, which shows the vista across False Bay, looking over the swell of the ocean toward the Hottentots Hol­land Mountains, with Cape Hangklip to the left, and the famed Cape Point to the right. I work from a room with this view, which might account for fewer books published than I’d like! I swim every day, choosing between one of the many tidal pools along this coastline, my favourite being Dalebrook pool in the next suburb along from mine.

As South Africans, we’ve just recently come through six weeks of beaches being banned; after a resurgence of Covid-19 we were denied our summer and so I’ve been making the most of getting out, dunking in the water, loving the cold slap of it. With lockdown easing after this second wave, and with the beaches reopening, the world seems lighter, the stress less severe — the Covid oppression lifts, at least for a while. My life really revolves around staying sane during this trying time, keeping my cat off my computer so I can put in my writing quota, and feeding my son more than pizza.

I was thrilled that in January my crime novel, Divine Justice, was published in the US by Catalyst Press. My memoir titled Death and the After Parties was also recently released. Going from one to the other, though, from writing crime fiction to memoir, was a little like being in an insane asylum of my own design, as I hopped in and out of a number of ‘heads’ including my own, interrogating truth then engaging with fiction and back again.

After my husband died from a massive coronary several years ago, I found myself on the path of memoirist, dangerous and convoluted at times, as I tried to accept and understand his death, who I was, and am, and how my childhood had a bearing on how I coped with loss. I think I know myself better now as I’ve interrogated this difficult and emotional period of my life.

But writing crime fiction… what does it give me? It gives me pleasure.

Crime writing gives me the opportunity to slip right out of my skin. It allows me to take my own life less seriously. Writing about death and dying was intensely focused on harsh reality, the passing of my mother, then in quick succession, the passing of my husband, father and mother-in-law. Obsessed by death, waves of melancholy would often sweep over me. Exposing my grief, and how I dealt with it, through writing, meant I had to look deep, and not shy from my flaws, or the truth of how I could – when seeking compassion from others – be sometimes less than compassionate myself. The gaze, the journey, of the memoirist has to be inwards, and inclusive of the past.

Writing Rae Valentine thrillers, on the other hand, offers the opportunity to rub my hands in glee and allow my imagination to run wild. I write from multiple points of view, exploring a number of characters – including the baddies – each with their own self-identity and unique perceptions. Although it can add to the stress of what sometimes feels like a multiple personality disorder, it’s also perverted fun.

Divine Justice sees Rae Valentine’s first solo case as a private investigator as she becomes embroiled with a white supremacist group, The Core – a motley crew of disenfranchised fanatics spoiling for trouble – who want to set up their exclusive homeland. Add a mad pastor to the mix and unpredictable Cape Town weather patterns, this is a recipe for turbulence, and violence, and of course, a satisfying ending when all is said and written. James Earl wrote that it could be taken ‘a little tongue in cheek’, and yes, this fantasy or over-the-top element reflects my love of writers such as Carl Hiaasen and Mark Haskell Smith. I’d always wanted to be a movie director, so this is the next best thing – creating a story and directing every bit of it, including a cast of whacky characters.

Generally I’m aware of a theme when I begin writing, with the theme of ‘hate’ coursing through Divine Justice. Worldwide we’ve seen the rise of ‘othering’, of setting apart anyone not like ‘us’, whatever ‘us’ is perceived to be. One group hates the other, and the hate is fomented by unsavoury leaders who want all eyes on them, who want absolute Power. (It continues to shock me that Trump will not ratify Bided as legitimate President of the US.) I wrote about this rising white supremacy for CrimeReads, and how it influenced Divine Justice.

When it comes to Rae Valentine, she’s triply disadvantaged – as female, disabled, and a woman of colour. Separated from her biological parents as a young child, she lived with her foster parents in a posh suburb in Cape Town, but ran away as a teenager and survived on the street for months before finally going into rehab, a few times. Losing her leg was the turning point. She spoke her truth and from then on she was sought after as a counsellor and motivational speaker. She has presence, guts, communicates easily. But terminally flawed, she continually looks for love in the wrong places. Although I’m not a romantic, relationship issues intrigue me and Rae certainly has her difficulties.

All her life she’s been conflicted, has carried guilt that she too could have grown up in a so-called ‘coloured’ township, without the advantages she’s had, that she wasted that head start by getting into marijuana while at high school, then turning to hard drugs and turning her back on her foster family. She had her leg amputated after shooting up heroine between her toes once too often. A government issue prosthesis was her first ‘leg’, but she’s hoping, certainly as the series progresses, to have a state-of-the-art designer number made for her exclusively.

Rae indeed, has become a real person for me, someone I could meet around the next corner as she reflects so many realities of Cape Town culture and society.  Even her surname, Valentine, is ‘Cape Town’, a slave name, indicating her descent.

As a newly minted PI she interacts with the underbelly of the city. Poverty and wealth collide on every level of life. Cape Town is as cosmopolitan and sophisticated as any other big city, with office space, galleries and new apartment blocks, but also as problematic, with informal pavement stalls spilling into the streets and an increasing number of homeless setting up camp under bridges and along highways. A stone’s throw from a wealthy suburb like Bishop’s Court, a twenty-minute drive from the city centre, where mansions have tennis courts and swimming pools, is a township like Kayelitsha, where homes are shoebox shacks of corrugated iron, packed together, separated only by narrow alleys. Whereas the city is green, the shacklands are grey, stark and bleak. All of it lies under the shadow of Table Mountain, the iconic landmark that will remain long after we’ve all given up on the battles raging on.

With plenty of fractures in society, plenty of conflict, plenty of clashes, plenty of human dissatisfaction, crime is rife. I’m certainly not spoiled for choice when it comes to material.

With this potted history of me, of Rae, and a few photos, I hope to leave you with a sense of my life, and what I bring to crime fiction.

Conyer Returns to Roots for Debut