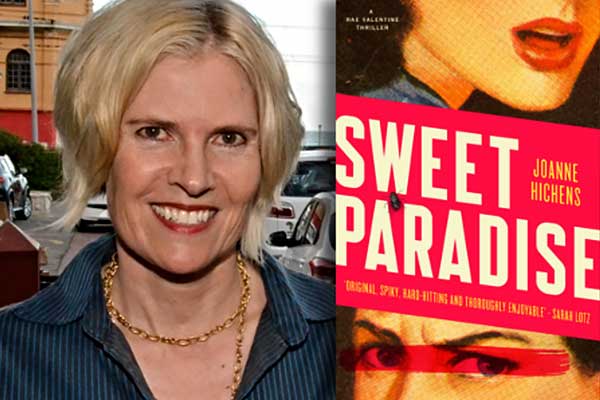 Joanne Hichens is a South African author living in Cape Town. SWEET PARADISE is the second in the Rae Valentine series. In this escapade, in Rae’s efforts to locate a missing teenager, she falls foul of a psychological cesspit of obsession, addiction, misogyny and love-gone-bad.

The Paradise of SWEET PARADISE is a rehab clinic in Cape Town. Superficially, it’s an upmarket facility where patients suffering from addictive behavior or geriatric mental degeneration can receive care and help. Below the surface it’s a very dangerous place. This sort of scenario has played out in fiction (and real life) quite often, but your backstory has a different take on it. What attracted you to this setting and how did you research it?

I worked in a psychiatric clinic for a number of years, as an expressive arts practitioner, as well as coordinating an eating disorders unit, so I know the setting first hand. I took a break from working with psychiatric patients in order to do a Masters degree in Creative Writing and then my life took a different path. I miss the work of teasing out the underlying reasons why people behave as they do. To see a patient’s angst and sorrow reflected in art work, and to engage with those images as a point of departure for discussion in order to alleviate pain, was an incredibly satisfying experience. Art therapy is widely misunderstood – yet it offers a creative way to work with the psyche, with ‘what cannot be seen’, as the art therapist, Eden Kramer, does in SWEET PARADISE.

As far as the back story goes, and the themes, there’re all sorts of nasty undercurrents. No-one in Paradise Place Clinic is who they appear to be, and everyone has their secrets… That said, I have the utmost respect for those who work at psychiatric clinics and rehab centres. I have profound respect for those who take the risk of facing the past, inpatients who want to change destructive behavior and expose their fears in order to facilitate change. I’ve addressed that in the book – that mental illness is not to be shunned, or ignored.

This is a book about addiction, but not the ‘usual’ drug addiction. All the main characters have it in one way or another. Would you comment?

My take is that we’re all damaged in some way. Every one of us wears a mask of sorts, as human beings we’re complex. I explore that in SWEET PARADISE. Indeed every character has a crutch of some sort… the trick is to have insight, to understand when that crutch takes over as addiction — and then to do something about it. When it comes to addiction clinics, or rehab programmes, most deal with a variety of addictions and addictive behavior. SWEET PARADISE the mixed bag of inpatients is not only a reflection of humanity — a slice of life — but I used the ‘group’ as a device if you will, to heighten a streak of dark humour. My cast of minor characters collectively suffers anorexia, obesity, sexual addiction, phobias. They form a sort of chorus for Rae as she scratches at the surface to discover what’s really going on in Paradise Place.

Rae Valentine is back, but this time she’s very much on her own. Her partner is in rehab, her boyfriend dumps her, her friends and family are at a distance. Her manuscript is rejected. She loses her job, forcing her to accept an unattractive case. Was it important that she was at rock bottom when she faced Paradise?

Yes, I think so. This is also reflective of my own struggles during the time writing of the novel. My husband died of heart attack right after I’d completed a first draft. I struggled to work. I felt an overwhelming sense of loss, was sometimes engulfed by a sense of meaningless. How do you recover from losing the one you love? I had to keep going, keep looking after my children, keep writing… When it comes to Rae, it might have been easier for her to have relapsed — as an ex-junkie, she knows the pitfalls of slipping back into addiction which seems so much more attractive when life throws curve balls — but she gets on with her new challenge. She ‘kicks self pity out the door and gets proactive.’ She has to keep focused. At least the new job will pay the bills! Of course I had to maintain her integrity. She has compassion and strength of character. She has determination. She sees things through. She’s a modern heroine. You can’t let a bad book deal or your boyfriend dumping you stop your life! It happens all too often…

Another problem for Rae is dealing with her missing leg which is such an important part of her character. How did you get inside the head of someone with a major physical disability?

With around fifteen percent of the world’s population suffering physical disability of some kind, it’s a sector of society that continues to gain prominence. My take on this is that we all have some sort of disability, whether mental or physical. It’s a matter of degrees. I try to look at disability in the broadest sense of the term. To be specific about the physical aspect, Rae’s left leg is amputated below the knee. As a junkie she shot up too much Wellcanol and collapsed her veins. She nearly died. So her physical amputation is her constant reminder of the point in her life where she had to make a decision — give up drugs or lose more than a leg. As a writer, I constantly adjust her physical behavior. Although, with a range of prosthetics that become more and more sophisticated by the day, one can do almost any physical activity, she experiences other related physical problems. Her hip aches, her stump chafes, she has to keep the stump meticulously clean. That said, you can never underestimate the emotional aspect linked to disability — Rae’s sense of being less than ‘whole’, the nagging worry that she might not find a partner because of this disability, and the need to cope with emotions of inadequacy. But loss is a universal theme — how do we accept ourselves for who we are, and as we are? With whatever losses we’ve suffered?

Jean Pierre from DIVINE JUSTICE comes back to haunt her. He’s as nasty a character as one can imagine, and he manipulates mercilessly, yet initially one feels a touch of sympathy for him. Or is that just me?

No, it’s not just you. As I began to intertwine the stories of the psychiatric clinic and the prison, I wanted the reader to have sympathy for Jean Pierre. Just a little of course. No character is entirely wicked, or saintly, and as a reader I’m more interested in characters — even the baddies — who show at least some element of humanity. It’s a stretch with Jean Pierre. He’s despicable, violently misogynist, a convicted criminal of treason. He rightly sits rotting in a prison cell. But even Jean Pierre understands he’s damaged goods. His few moments of insight reveal his own sense of loss… he wishes he wasn’t ‘so fucked up… as they say in the vernacular’. But you can’t have too much empathy for him. Justice must be done, after all. I’m big on Justice.

Following on from the previous question, manipulation at a distance is a subtheme and not only Jean Pierre is involved. Does twenty-first century technology make this a more dangerous threat and more fertile ground for thriller writers?

Absolutely. No question about it. The cyber era allows anyone to communicate with anyone in any part of the world, at any time, and to represent themselves as they wish — and indeed to manipulate to the extreme. As for social media — WhatsApp, Instagram, twitter, Facebook — this makes for a selfish and self-centred way of perceiving the world. Literally the focus is on ‘selfies’ in certain generations. No-one goes anywhere without a multi-purpose cell phone — a cell phone, or mobile, serves as a watch, a camera, has all those apps on it to keep you connected. Even Rae suffers from being a slave to her cell phone, which she denies of course, but her reliance on her cell phone ties into the overall theme of addiction and obsession. 21st Century technology is a given and we’ll see more and more thrillers dealing with cyber-space crime. As for the ‘landline’ it’ll soon be tossed on the rubbish heap of obsolete technology.

You use a frenetic writing style and rapid point of view changes to heighten and maintain the tension in this thriller. Is it your natural style, or did you hone it for this series?

My style in general is probably frenetic — my personal style, as well as my writing style! I’ve always enjoyed thrillers which present multiple viewpoints. I find this opens up the writing — a character can behave in a certain way, but his or her interior life gives the game away. As an example, the evil thoughts of Nurse Aide Nina Brink become privy to the reader, but Rae has no idea of Nina’s motivation. This heightens the tension for the reader. When will Rae realize she’s in danger? Will she be able to deliver herself from evil? But writing from multiple viewpoints is difficult to manage. I work to hone the writing to flow, and to create believable voices which stand alone. I have to admit too that I especially enjoy writing from the viewpoint of deviant characters, which provides opportunity for black comedy. What I’m really interested in, as a writer, is the rhythm of the prose. If one reads a work out loud, then the rhythm begins to create its own momentum and carries the story. Certainly my main intention is to move the story along.

Rae finishes the book no better off than she started, but still fighting. What’s ahead for her?

Well, she’s survived! Again! She deserves a few good dates. She may join Elite Singles and be asked to investigate some shady behavior going on there. In the wake of the Ashley Madison fiasco this could be interesting to research. As a writer I’d have fun, and maybe get some good dinners out of it! Hopefully neither Rae, nor I, would court any trouble we can’t handle…
And Rae deserves a customized prosthesis, something really arty and gorgeous…

I can’t wait for the next Priscilla Holmes thriller