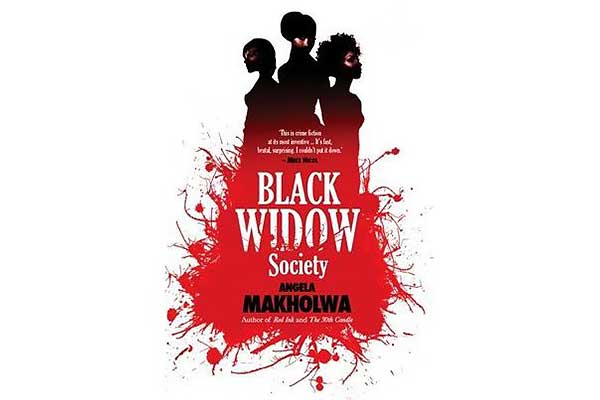 This month Joanne Hichens interviews businesswoman and author Angela Makholwa. A very busy woman indeed. Apart from writing thrillers and running her company Britespark Communications, she is also a wife and mother to two tots.

Angela Makholwa’s debut crime thriller, RED INK(2009), is set in gritty contemporary Johannesburg. The story is loosely based on her C-Max prison interviews with a convicted serial killer. Pan Macmillan launched her third novel, BLACK WIDOW SOCIETYin 2013. The title menacingly makes reference to the deathly Black Widow spider—the female latrodectus, which, as an act of sexual cannibalism, eats her partner after the mating ritual. So you know what you’re in for with this read! BLACK WIDOW SOCIETY could succinctly be advertised on twitter: A triumvirate of wealthy women run a secret society aimed at eliminating errant husbands…Now doesn’t that sound like a book you’d just love to get your fangs into? Certainly if you have man troubles.

As a sexy, intelligent, comedy of errors, BLACK WIDOW SOCIETY not only had me chortling away, but had me thinking deeply about the nature of abuse meted out by both genders.

Angela, The Black Widow Society is indeed led by a Triumvirate of strong, powerful, unstoppable and very nasty women. So tell us which ‘bitch’ we’ll love to hate?

Talullah is at the apex of the Black Widow Society—she’s tough, ruthless, and single-minded in her purpose. She’s the one most people love to hate. Yet underneath her steely exterior lies someone who truly believes she has a purpose to serve—to save women from abusive marriages. There is also a vulnerability to her, which she is only able to explore through her unusual sexual escapades.

Edna is the pacifist amongst the three—a businesswoman who is thorough in her administrative duties, which aid in keeping the wheels of the society turning.

Nkosazana is very different from the two older ladies; for one thing she’s a lesbian who has never been married, and for another, she is far more interested in the fiscal aspects of the organization. Each hit equates to significant financial benefits for the Black Widow Society as a portion of the life insurance payout goes to the society. For Nkosazana, this becomes an increasingly more important goal than the ‘altruistic’ purpose of the organization.

Women with abusive, adulterous, just plain horrible hubbys find their way to the society to initiate “the ultimate solution”. Salome, a “satisfied wife” especially grabs our sympathy as her hubby infected her with HIV. Why kill him though? What about the divorce courts? Why not report him? Expose him?

The Black Widow Society is careful about measuring the merits of each case that’s brought into its fold.

Salome’s husband made the mistake of expecting her to deny her HIV infection (by him) even though it was medically diagnosed. He dismissed her claims and instructed her to abort the child she was carrying. The main reason she can’t go to the divorce courts is because the ante-nuptial contract she signed prejudices her financially and because she feels that she needs to be vindicated (for her HIV infection and his general philandering).

Apart from the delicious entertainment, does the killing ultimately make the women who use the services of the Black Widow Society as complicit as the men?

What if your life is threatened should you dare walk out of the relationship? What if you can’t find any other way out of the situation?Is killing one’s partner acceptable after enduring a life of physical and/or emotional abuse?

These are questions the reader will have to work out for themselves. The reality is that many women have died at the hands of their abusive spouses and conversely, many women (and men) have contracted killers to eliminate their partners solely for financial gain. Where do you draw the line? At what point can taking another person’s life ever be justified? I hope my book gets readers thinking about that.

Might we see an upsurge in husbands the world over—only the abusive kind of course—getting what they deserve?

That’s a tricky question—what is it that abusive husbands deserve? The same abuse meted out to them? A jail term? Abandonment?I’d say murder is far too extreme, but I did enjoy meting it out as just desserts to some of the less savoury characters in the book.

Are you making a statement about the way men and women engage with each other?

The main issue at the core of this book is that of domestic abuse, which is a very real and painful part of South African daily life. It’s something that goes on in both the upper and lower echelons of our society and has ripple effects such as rape and the violation of women’s rights in different spheres of life. I believe that we need to engage more with this issue because in many ways it’s a disease that gets passed down through generations—it’s a cycle we need to break.

The Triumvirate’s designated hit man, Mzwakhe Khuswayo, is a compelling character. He has love problems of his own, as he tries to understand if his mate Marie has betrayed him in any way. But Mzwakhe’s main role in the novel is as killer extraordinaire. How did you research the most effective  ways of getting rid of troublesome husbands?

My poor husband lost a lot of sleep, I must say. My web browser history would have landed me in jail if anything had happened to him during this time. I also had to look to my mother (a nursing sister) and my brother-in-law, who’s a policeman, for some ideas! Cold case files were also a resource…it wasn’t pretty.

And of course, once the altruistic idealism of the the Black Widow Society begins crumble, the society itself starts to unravel…. What was your motivation behind setting up the society and then setting the worm loose?

I truly believe that any conspiracy by a group of people that is driven by evil intent is bound to implode, often with little help from external forces…I liked the idea of a domino effect—seeing this chain reaction of different pieces of this “brilliant scheme” starting to tumble down—all the suspicion and paranoia threatening to drive everyone crazy. I enjoyed building up to this tense climate where you see this once assured secret society spiraling into complete mayhem and uncertainty.

Sound a little like a description of contemporary South African society, and indeed I love the South African feel of the text, the crazy mixed-up cultures, the rich melting pot adding texture. How do you reflect on race relations?

South Africa is definitely one of the most interesting countries to live in from a cultural perspective. We’re a nation still going through the kind of identity crisis that only an angst-ridden, adolescent teenager can relate to, which makes for some interesting social commentary that I honestly cannot resist tapping into.

I dread the day that we mature and become a boring, self-actualized adult.

You write with plenty of dark humour. It’s quite a different read to your debut novel RED INK which was more serious but no less compelling. Are you making a move toward satire?

Being South African is a daily passport to satire, so why not travel light?

So what’s next on the agenda?

Sounds like another South African classic… Thanks or the chat, Angela.