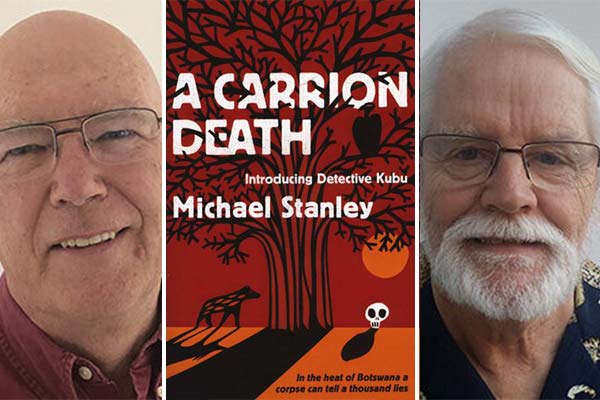 Michael Stanley is the writing team of Michael Sears and Stanley Trollip. Both academics, Michael joined the University of the Witwatersrand in Johannesburg in 1972 and still works there part time; Stanley has been a professor at a number of universities in the United States.  They are old friends who share, among other things, a love of food, wine, and Africa’s wildlife areas. The spark for their first novel in the ‘Kubu’ series, A CARRION DEATH, came to them on a game and bird watching trip to Botswana. They believe heat and desert can be just as threatening as the snows of Scandinavia, and describe their novels as Sunshine Noir.

Nowadays Stanley splits his time between Cape Town and Minneapolis, and Michael lives in Johannesburg.

After five ‘Kubu’ novels — Detective ‘Kubu’ Bengu, of the Botswana Criminal Investigation Department, is the affable, food-loving protagonist who stars in the series — what have been the highs, and lows?

There have been so many highs! Getting the first book published by a great publisher (HarperCollins), getting excellent reviews, a suite of nominations for awards in the US and the UK and winning the Barry Award for DEATH OF THE MANTIS, which was also short-listed for an Edgar, meeting great authors and readers, and learning lots more about writing and even about ourselves. Perhaps best of all has been to watch Kubu grow through the books.

Of course there have been lows, too.  Times when it just seems to be a slog, and we’re not sure where we’re going; times when people seem more effusive with their praise than their pocket books! But they’re hardly worth mentioning relative to the highs.

What have you learned about Kubu that most surprises you?

Kubu was never intended to be the protagonist. That was going to be the super-smart ecologist who discovered the first body in A CARRION DEATH. We’d been told to write about what you know so we thought the hero should be an academic. However in the first few chapters, Kubu told us his nickname (it means ‘hippopotamus’ in Setswana), how he came to be a detective (his love of puzzles and the Bushman school friend who’d shown him how to see beyond the superficial), and his interesting thoughts about the newly-discovered body. By the time Kubu reached the body, he’d taken over as the lead character. That was surely the most surprising thing!

Kubu is well known as a family man, with strong ties to his wife, Joy, and his children. He’s also a man of stature and solidity in more ways than one! How has he developed through the series?

His character and personality have grown richer and more nuanced over the books. There’s been more time to explore his relationships with his family and colleagues and opportunities to see him facing different challenges. But we think he’s still pretty much the same under his XXXL skin.

What is it about your setting, Botswana, that you find most alluring? How did you, as South Africans, decide to set your thrillers in ‘foreign territory’ so to speak and how is Botswana different from other African territories?

Botswana is a wonderful country, with friendly people, gorgeous environment, and good management. It’s a lucky country in the sense that it has enormous diamond wealth that was developed at the best time for that commodity. Unlike many other countries — not only in Africa — is that much of that wealth went into infrastructure, health, and education rather than into the pockets of the people in power.

As to why we decided to set our books there, our debut novel required a setting where you could get into a wildlife area without control gates and the like — where you could dump a body to be eaten by hyenas. In retrospect, we find Botswana a very intriguing base from which to explore southern African issues that are not inherited from apartheid, yet are still quite crucial to the region – blood diamonds, the legacy of the war in Rhodesia/Zimbabwe, the plight of the Bushman people, murders for body parts for black magic, and the growing Chinese influence.

Talking of the Chinese influence, this seems to be more and more prevalent in African thrillers. Would you agree that this is the case?

The Chinese presence is more and more prevalent in Africa, and thus in all aspects including crime and crime fiction. The Chinese have been called the new colonialists. Cheap money and cheap materials (sometimes cheap not only in price) make them hard to beat when it comes to tenders and they bring in their own engineers and workers. There’s no benefit to the local people and very little interaction. It’s a recipe for friction, and that’s what gave us the idea for the backstory for DEATH IN THE FAMILY.

To ask specifically about the latest Kubu thriller, A DEATH IN THE FAMILY, the novel starts off with the tragic murder of Kubu’s father, Wilmon Bengu. Firstly, why kill off a revered family member

Kubu is not in the mold of the tormented detective who is either an alcoholic or has been one. He has a loving family, and despite a few hiccups on the way, two happy children. We felt he was too settled in his comfort zone; perhaps we were too settled in our comfort zone. Characters grow through a series by being placed in conflict and reacting to it. We wanted Kubu to face the emotional conflict that comes from a death in the family.

While the extended family is devastated, Kubu’s mother, Amantle, deals with the plans for Wilmon’s funeral. Traditional Botswana funerals — many of the aspects hark back to pre-Christian times and ancestor worship, and in that case it will be good to be on the right side of the deceased!  — are quite extensive and involve the whole community. These are sad days indeed for Kubu.

The murder certainly shows another side to Kubu. Not only is he grieving, but he’s frustrated sitting on the side-lines, prohibited from investigating his father’s murder. Kubu feels threatened by the younger, rookie-detective Samantha Khama, who takes the role of primary investigator. The tension between Samantha and Kubu is palpable. Can you tell us more about the relationship between them?

Samantha made her first appearance in DEADLY HARVEST, the previous book in the series.  She’s a feisty woman who will not accept a secondary role in the CID, which is largely male, as you would expect in the paternalistic Batswana culture. She is passionate about crimes against women, particularly murder for body parts. Kubu fancies himself as a modern man, but he had to come to terms with Samantha’s direct approach and refusal to become ‘one of the boys.’  They developed a close relationship in DEADLY HARVEST, but their views are still not really aligned. We think the ambivalence of their relationship makes an interesting context to the crimes they solve.

While Samantha Khama investigates Wilmon Bengu’s murder, trouble is brewing in the nearby village of Shoshong. What starts out as a seemingly solid police procedural becomes more and more intriguing as political subterfuge unfolds. Did you have fun writing the corruption which extends to the highest levels?

Yes, it was fun, and exploring corruption certainly helps to move the plot forward. Botswana is a pretty well managed country, but one bad apple and there goes the barrel!

This is a universal issue, but it seems to be particularly focused in Botswana. The Batswana people are the dominant culture, and that culture is still largely structured around the chief, governing with his elders and through the kgotla (traditional court) system that can impose punishments such as lashings. Behavior contrary to those norms may be illegal (homosexuality is an example). Although the country has an excellent record in terms of honest elections, the ruling party founded by Seretse Khama and others has never lost one. The younger people, however, don’t want to wait to become elders and want to be heard now.

Which brings us to the conflict over mining rights in the area, which unfolds in DEATH IN A FAMILY.  This is especially interesting in light of the 2012 conflict at the South African Lonmin mine at Marikana which made world headlines after police shot and killed thirty-four people, mainly striking mineworkers. Did the events at Marikana influence your story line at all?

Indeed it did. We wondered what might have happened at Marikana if the police had not been so well armed and trigger happy, but still facing an angry crowd on the verge of hysteria. Our story explores the conflict between the old traditional culture and beliefs and the anger and disillusionment of young people without money, jobs, or hope. Sadly, as mentioned, this is a context becoming almost universal in the twenty-first century.

As the plot thickens with various twists, and Wilmon’s murder and land issues both fall under the spotlight, Kubu visits New York to track down a fleeing USA national who might have answers to questions. One thing Kubu discovers is that he doesn’t like the winter cold! Does ‘crossing borders’ make the African crime-thriller more accessible to a USA and European audience?

This was a book about Kubu out of his comfort zone. The emotional charge of his father’s murder and the friction with his colleagues and his boss certainly did that. His visit to New York takes him out of his environment as well, and, we think, that allowed him a better perspective on himself and the case.  The fact that he actually needed to, to make some contacts there was almost incidental.

From the point of view of US readers, we hope it’s entertaining to see the city from a foreigner’s perspective.  Maybe Americans who make their first visit to the Big Apple will have some fellow feeling with Kubu! One is reminded too, that readers who like armchair travel enjoy the foreign settings and varied cultures of Africa, too.

As Lee Child once said, ‘Global exposure is a two-way street.’

On the lighter side, you’ve published ‘Kubu’ cook book! I love it! In fact, the recipes are so simple, I might even try out a few! How did the cook book come about?

Kubu loves food, and his wife Joy is an excellent cook.  (Kubu is barely able to boil water, but he is good at opening wine.)  We are also very keen on food, and like to try different styles of dish. Stan is also an excellent cook so he actually prepares them himself to try out.  Some of the recipes work their ways into the books, or at least the dishes are described.

One of our readers suggested that we should collect the recipes and others that Kubu might enjoy, and put them together as a short cook book.  In fact, he said, call it the KUkBUk.  It seemed such a super idea that we couldn’t resist it. The book is called A TASTE OF AFRICA, with the KUkBUk subtitle, and all royalties go to the great Books for Africa charity (www.booksforafrica.org) that supplies books to dozens of African countries.

That’s a wonderful gesture. Just to make sure, are all the recipes tried and tested?

Every one!  If we don’t enjoy them, they don’t make it into the book!

Unbecoming by Joanne Fedler, an unflinching look at midlife