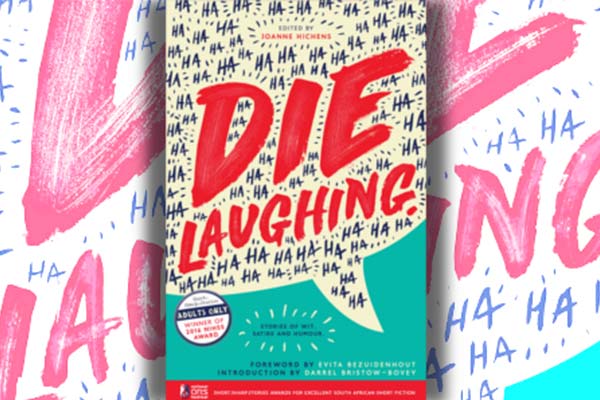 Die Laughing is the fourth of the Short.Sharp.Stories Awards anthologies, following Bloody Satisfied, a collection of ‘cracking’ crime-fiction tales (2013), Adults Only, stories of love, lust, sex and sensuality (2014), and Incredible Journey, stories that move you (2015).

This time around, with Die Laughing, we wanted to find humour in our South African situation. After last year’s anthology, Incredible Journey, which included many heartfelt and intense tales, we wanted to have some fun. We encouraged writers to explore stories of wit and humour, but we also called for stories which derive from the darker aspects of life – the absurd and the tragi-comic. It is perhaps universally accepted that humour takes many forms, and that the extremes of human behaviour have long been fodder for irreverent minds. It is also accepted that humour provides release of tension. Certainly in South Africa it helps to send ourselves up a little as we consider the incongruities of living in, as contributor Janine Milne writes, “this crazy/beautiful country”.

Making the choice of which stories to include in the anthology was challenging. Many writers, perhaps caught off guard by the title of the book, struggled to get to grips with humour. The English idiom ‘die laughing’ was often taken literally and our readers were treated to a myriad twisted tales of death as opposed to the light and truly ‘laugh out loud’ funny.

That said, the Short.Sharp.Stories team has put together a diverse collection which reflects the wide spectrum of South African ‘humour’. At one end of the continuum we have potty-humour and slapstick, while at the other end is brutal satire, and the fantastical careening towards the macabre. We have included stories which are subtle and sophisticated, and those that play wickedly with language. Some stories may breach sensitivities, but risks must be taken, as to censor self-expression, Evita reminds in her foreword, will keep us ‘lost in the wilderness of political correctness’.

As always, the challenge with these anthologies remains to include writers rising through the ranks as well as to showcase established writers, sometimes a delicate balance to achieve. Bearing this in mind, there can be no sustained excellence in South African writing without creating opportunities for new writers to test their mettle.

When it comes to developing talent, I’m not as cynical as the editor in Raphael d’Abdon’s story ‘Don’t Give Up, Will’. I’m a Pollyanna who believes rather that if there’s a will there is a way. But it comes at a price: hard graft, which means continual rewriting as less practiced writers, increasingly conscious of style and content, hone their craft. As Werner Pretorius mentions in the note after his story, ‘James Bond is from Pretoria West’, his airplane scene rattled around for years in a drawer. ‘Acceptance’ or ‘overnight success’ often has a backstory of years of effort. As the stories are judged raw, the more coherent and polished the stories are when delivered to the Short.Sharp.Stories inbox, the more likely the possibility of publication. Of course, we are always looking for that elusive writerly quality called ‘voice’, but editing does not imply rewriting.

In general, a call for stories is made in July. The deadline is the end of December. The stories are anonymously read by a range of readers. At this point around 30 stories are chosen as a longlist from which 20 are ultimately published. The judges read all 30 longlisted stories, proffer opinions on the stories, and it is at this stage that the shortlist and the
winners are decided. We have to date, since July 2012, received in excess of 700 entries, of which we’ve published 86 stories attributed to 76 writers. A number are new voices, others are prize-winning writers of note. In each anthology
we have attempted to offer a mix of voices representing, in the best possible way, the theme as per the competition brief.

Apart from publishing the selected stories in our anthologies, we’ve placed stories in print and in online magazines, including Aerodrome, Prufrock, and Playboy SA, and have placed interviews with the writers on Bookslive. Via our Short.Sharp.Stories website, Facebook and twitter, news of Short.Sharp.Stories is spreading. This year we received a notable number of entries from South Africans living abroad, an indication that the competition is gaining popularity not only at home but beyond our shores.

Indeed, 2016 has been a good year for Short.Sharp.Stories. Adults Only won the coveted National Institute for the Humanities and Social Sciences Award in the category Best Edited Collection. A third of the R60 000 prize money was paid forward to the writers. Equally thrilling was the news that two stories from Incredible Journey – ‘At Your Requiem’ by Bongani Kona and ‘Memories We Lost’ by Lidudumalingani – were shortlisted for the prestigious 2016 Caine Prize for Writing in Africa. As for the first anthology in the series, Bloody Satisfied, the sold-out reprint indicated the early success of the project.

It has been a pleasure to be associated with this project – to work with talented writers across a rich cultural heritage, and to publish and promote South African short fiction.

Established South African writers doing it for themselves